Want the latest information and stories behind the stories? Subscribe to the email newsletter! Newsletter is sent every other month. You can unsubscribe at any time. Your information will never be sold.
June 04, 2011

Book Review: Dead Beyond the Fence 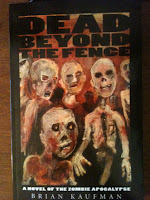 We frequently review classic horror books at the Undead Bar Association. Newer material has been seeping into the office, and there's now a neat stack sitting next to Black's Law Dictionary and our three volume set of Contracts – Restatement of the Law. Top of the new fiction stack in Dead Beyond the Fence, by Brian Kaufman.

It's a zombie story; the cover and the title give it away. Knowing that, the reader doesn't need the story to open on guts and gore...and it doesn't. Instead, Kaufman opens his tale with elegant brutality. He uses symbolism and metaphor to introduce the reader to the main characters and their post-apocalyptic world.

Dead Beyond the Fence is a well-paced, quick-moving, page-turner of a zombie tale. What sets it apart from other zombie novels on the market is Kaufman's writing style. His metaphors and descriptions are always vivid. Sometimes they're aggressive, as in the opening. At other times they verge on subliminal. Example: Kaufman's description of one character at the end of the book is written in brutal, gory detail. It's easy to get lost in the picture he paints, but underneath the details is a symbolic summary of the dying character's life. She has shunned motherhood, and learned to distrust anyone who would bring new life into the world. She has lost true smiles, only forcing cheerfulness when it serves her ends. She has become paralyzed by fear, immobilized and locked in the building that will become her tomb. Kaufman reminds us of all these things as the character dies. Its a miniature of one character’s life, painted with her own blood.

The main characters are Angel and Kevin, once co-workers and now lovers. Angel is beautiful and sweet, the kind of person others are drawn to in dark times because of all the light she represents. Kevin's the guy you want on your team when the zombie apocalypse comes. He kicks zombie butt, knows how to make and execute a plan, yet is able to cling to the things of the world that make him – all of us – human. The story tracks Angel and Kevin as they leave one shelter and seek new ones.

Kaufman has included in the book a novella that covers events after the main novel ends. You can read it, or skip it. If I had it to do over, I'd skip it. It's well written, but unnecessary. Arguably, its counterproductive to the things Kaufman achieved in the main book.

In the author's note, Kaufman explains that he included the novella to answer questions from people about what happened next, questions he thought were answered metaphorically by the gun in the final pages of the novel. But the gun wasn't the dominant symbol at the end. It was overpowered by the promise of a better tomorrow, told to us through the first sprouts of spring grass and the promise of new human life. I finished the novel feeling hopeful; I finished the novella feeling depressed.

To be fair, my disappointment in the novella is largely the result of liking Kaufman's characters from the novel. If he hadn't written them so dang well I wouldn't have cared what happened to them later on. But I did care. And I didn't like the way the novella ended.

The novel is a great read; definitely worth getting the book. And yeah, the included novella's well-written. I just refuse to call it a great read because I didn't like it.

What? Hey, I have never claimed to be the perfect reviewer. Direct and honest, yes. Perfect, no.

Dead Beyond the Fence is available through Dark Silo Press.