Want the latest information and stories behind the stories? Subscribe to the email newsletter! Newsletter is sent every other month. You can unsubscribe at any time. Your information will never be sold.
July 08, 2012

Wow. What a week!


Having the 4th of July fall on a Wednesday was odd. It really broke up the week in an odd way. And since fireworks around here don't start until well after 9pm, it made for some tired co-workers the next day on the day job.


I celebrated the holiday with friends and family, in a home with a good view of the main fireworks display. The best thing about the view, oddly enough, was not seeing the city fireworks. It was seeing all the other fireworks. There was a big farm field to the west, and hardly another building in sight. So we had a view of the fireworks in all the smaller towns to the west and southwest. Little blossoms of light dusting the horizon. Then a group of people started setting off fireworks in the farm field, so we had an immediate view of colored lights. Amusingly, the people in the farm field did a better job of timing their fireworks to the city's patriotic music than the city did.


Nature did her part to add to the display. A summer lightning storm blew in from the south. It didn't move so fast that it overtook the fireworks or concealed them, but it lingered in the area long enough to compete with the man made display. But the fat orange moon had no desire to compete. It peaked out of the clouds and shook its head. It licked the envelope of the sky with a little circle of tongue, then folded itself into the night and sealed the clouds. Maybe it felt bad for wearing the wrong holiday color scheme. We'll never know.


The party menu was eclectic. I've given links to the recipes below. Wine was from Llano Winery in Lubbock, Texas. It's a habit of mine to celebrate the wines of whatever state I'm in, and most of my party guests agree. So it wasn't surprising to see a bottle of Llano appear. Dessert was mini-bundt cakes from the new Nordic Galley Bakeri in Amarillo.
Appetizer: Tabbouleh
Main Course: Ramen Shrimp Pouch
Pre-Dessert: Grape, Olive, Fig, and Fennel Salad


Update on Matriculated Death: Two exciting things happened this week. First, I found out that a Central Texas book club selected Matriculated Death for their book next month. I'm extremely honored. I told a member of the book club who contacted me that I would be happy to answer questions anyone has about the book or the series. Let me go ahead and throw that out to any book club that picks up a book from the Undead Bar Association Series. If your book club has questions, please contact me. I love to hear what readers think about the book and series, and answering questions gives us an opportunity to interact. And you're more likely to get inside information that way. ;)


The second exciting thing was the arrival of paperback copies of Matriculated Death on my doorstep. Actually holding the book in my hands felt unreal. 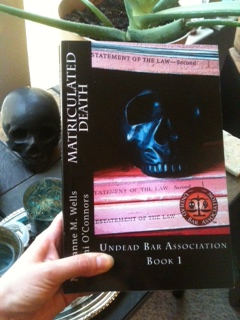 Yes, you're seeing two skulls in that picture. The one on the left is Skully. He's the model for the Matriculated Death cover art. You'll be seeing him on all the Undead Bar Association book covers.

Update on Book 2: As of today, I've written over 30,000 words on the sequel to Matriculated Death. The goal is to have a solid draft ready for review and first edit by the end of August. Glad I'd already set that goal privately, since my editor asked yesterday when she could expect a draft.


I posted a question earlier about whose voice I should use for the historic scenes in the book. The choice was between villain and victim. After listing out the pros and cons of each position, and polling readers and fellow writers, I was going to pick villain. But then my editor suggested a third option. Use a POV close to the victim who would have inside knowledge of the villain's motives. The more I thought about it, the more I liked it. It still has some cons, but it combines the pros of the other two options in an unusual and elegant way. So the voice for the historic scenes will be...


I'm not going to tell you. Not now. This new POV voice is intimately connected to the plot. Explaining the voice now would give away too many surprises. We'll wait for the book release in November for that.

Later this week, I'll have more inside information about Matriculated Death. Stay tuned!