Want the latest information and stories behind the stories? Subscribe to the email newsletter! Newsletter is sent every other month. You can unsubscribe at any time. Your information will never be sold.
August 09, 2012


These topics come up a lot in discussions about writing today, especially Young Adult writing. There's a movement to imbibe books with positive female role models, and another to evaluate female characters in existing literature. People do it with television and films, too; I've even seen an expletive laced rant discussing feminism in Joss Whedon's short-lived show, Firefly.

The wrong way: make your female heroine the anti-man. Make it her mission to prove on every page that she's as good as a man or better.

This idea of woman competing against man served as a rallying cry during the early days of the feminist movement, but it's counterproductive now. Feminism is ultimately about choices. A woman can chose to work in an office, work from home, work as a full-time wife and mother, or some combination of the above. And the feminist movement did much to provide those options. But never was it the end goal for every woman to spring out of bed in the morning screaming, “I'm better than a man!”

Unfortunately, there are modern feminists who think that is precisely the goal. And they reject any female character who loves a man, takes orders from a man at work, teams up with a man, raises well-adjusted kids, or bakes cookies, as being a positive role model. What they're left with for role models are gorgons with brass balls, the find of femme fails that real women and all men avoid.

If you write a character dedicated to proving she's better than a man, you're insulting the character. She's not a man. She's a woman. By comparing her to a man in order to define her worth, you demean her. The act of comparing is an insult. Just let her live.

For some writers, this caveat is unnecessary. Raine Thomas, for example, writes outstanding female role models into her stories. I recently finished reading her latest book, Defy, and I was struck by the integrity of her female lead, Tate. Is Tate out to prove something? Absolutely. Is she out to prove that she's better than a man? No. She's looking to find herself, and find a way home. Gender doesn't come into it. Not that she forgets she's a woman – given the kissing scenes, it's clear Tate is becoming very aware of her sexuality. But she's not an anti-man. She's a warrior, a dreamer, an adventurer...and that's enough. That's plenty. She's taking on the world; she doesn't have to take on gender roles.

The environment in Raine's books plays a large part in her ability to craft such characters. At no point does any character say to another, “You can't do that because you're a girl.” But if you do have characters acting in a blatantly sexist way, your heroine should respond if she's going to qualify as a positive feamle role model. At which point you've pretty much defined the theme of your book, and I for one won't read it. Nothing personal, I just find those take-on-the-sexists books incredibly dull.

Some will argue that the sexist attitude is still very much at play in real life. In certain areas, the video game industry in particular, I would agree. But that doesn't mean the role models we craft for young women need to overtly battle sexism.
The beauty of a book like Raine's is that it isn't real life. It's a fantasy, and that means it can be an aspiration. What if we raised an entire generation of young women who believed that the world should be a place free of sexism, and they all acted accordingly? What if we show them the best role models aren't women out to prove they're better than men; the best role models are the ones who foster a world where gender superiority has no meaning.

I think older generations struggle more with this writing caveat than my generation. They're coming from a different starting place. Here's a real life example.

It's law school graduation day. All I'm focused on is getting across the stage without tripping, and remembering to smile for the cameras. I'm clumsy, okay? It wouldn't be the first time I tripped at a major event. So I'm focused on my feet.

I'm not expecting much applause. My parents are in the audience, but the rest of the family couldn't make it. So no big cheering section for me. That's fine. If I do trip, there will be fewer witnesses who know me personally and can rub it in later.

My name is read, and it's announced that in addition to the law degree I'm being awarded a Masters in Business Administration. In my mind, this is not a big deal. The MBA hooding ceremony is next week. Between now and then I have to pack my belongings and clean the apartment. Today is today; next week is next week, I'll think about the MBA later. Walk out on stage and don't fall.

But as I walk out, I can't help but notice the applause. There's a lot of it, much more than two people should be able to produce. Huh, I think. Then I smile for the camera, shake hands with the professors, exit the stage, and do a private happy dance because I didn't mess up.

After the ceremony, I mention the surprising applause to my mother. “That was really nice,” I say; “I didn't expect it.”

“Well, you know why they applauded so loudly,” she replies.

“Because you're a woman.”

“You're a woman, and you earned two graduate degrees in four years. You're amazing!”

“I don't know about amazin. People graduate from the dual degree program all the time. My buddy Dan did today, same as me. There are dual-degree graduate programs all over the country, and plenty of graduates from them.”

“No, it's special in your case. Because you're a woman.”

She sighs and shakes her head at me. “There were two women sitting behind your dad and I who said 'wow' when you walked across the stage then cheered for you. They did that because they understood what a remarkable moment it was, for a woman to achieve as you have.” 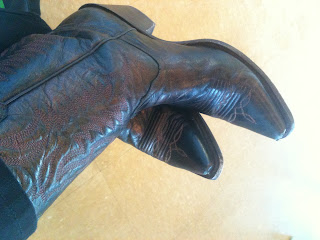 “Are you sure they weren't cheering something else? I'm the only graduate who wore boots. Were they cheering the boots?”

But I really think the applause was for the boots.
If my mother wrote the story of my life, it would probably have a theme of female triumph. But my mother was raised by a woman who told her every day that she had to prove she was better than a man. That's where she's coming from. If I wrote the story of my life, the theme would probably be caffeine.

Actually, I am writing the story of my life. I'm just not doing it in an autobiography. Between the heroines in my three series I've used a lot of autobiographical information, some of it presented symbolically. And at no point do my lead female characters, the ones most closely related to me, feel a need to prove they're better then men. No one ever told me that should be my goal in life, and I'm not going to preach it to anyone else.

My perspective on the issue colors my approach to writing. For the sake of my characters and readers, I think that's a good thing. I have an opportunity to write role models for the future, because I don't stare at the world through a filter from the past. You could argue that I have feminists of the past to thank for that opportunity. Maybe you're right. But I can be grateful to them without being them.
What will the role models produced by the next generation of writers look like? What issues will they tackle? And how can we help the writers of tomorrow, today?