Want the latest information and stories behind the stories? Subscribe to the email newsletter! Newsletter is sent every other month. You can unsubscribe at any time. Your information will never be sold.
May 27, 2016 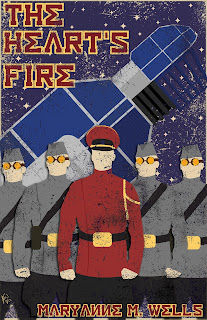 Luther Gregory, newly assigned to the spaceship SS ATTM, is eager to prove himself as a soldier and engineer. To his surprise, he’s not given an engineering position. Instead, Luther’s given a choice – accept a position as Valve in Training, a job he knows nothing about, or accept a position as ship’s mail clerk and fade into lonely, isolated obscurity. Luther studies the cold blue eyes of the current Valve, Jane Wingfield, and decides to take a chance on the unknown path.

As Luther begins his training, pressure builds in the engine room. A new device has been installed aboard the SS ATTM and it’s causing the engine’s heart to malfunction. Jane Wingfield is quick to point out the danger to the officers, but they refuse to act. The officers want the new device up and running no matter what the cost. Frustrated and desperate, Jane turns to Luther for help.
Together, Jane and Luther race through the ship to assemble a team of would-be heroes: the security chief, an absent-minded genius, the ship’s janitor, and a small boy with his pet chinchilla, Sparky. Luther believes the team has a chance, but his military training tells him he should follow the chain of command. The new recruit is torn.

With the ship threatening to explode and over a thousand lives on the line, Luther must decide where he stands. Either Luther is ready to serve as a ship’s Valve, or his first day on board the SS ATTM will be his last.