Want the latest information and stories behind the stories? Subscribe to the email newsletter! Newsletter is sent every other month. You can unsubscribe at any time. Your information will never be sold.
December 26, 2020 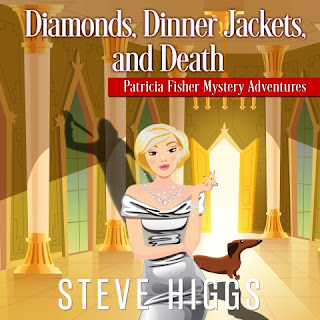 She spent a fortune on the dress. It would have been cheaper to buy unicorn horn, but before she can even put it on, a scream splits the air …

… and the first body is found.

Patricia and her friends are the special guests of the world’s third richest man, her benefactor, the Maharaja of Zangrabar. At a banquet thrown to celebrate a new peace treaty between his country, and long-time hostile neighbour, Itarnia, the murder of Itarnia’s ambassador does not bode well.

To prevent a return to war, Patricia and her team must unravel the clues to find the killer, but there’s more going on than a simple assassination, and it might be that even the Maharaja is lying to her.

With the clock ticking down, another body appears, but just when she needs to create a distraction, so too do some old friends.

Murder, mystery, and mayhem abound as her expensive dress sits unworn in its wrapper.

Will she get to put it on? Will she be able to follow the breadcrumbs to the end of this mystery?

Under pressure like never before, Patricia and her friends must keep two warring nations apart long enough to find the truth, but the truth in politics is an elusive beast, and there’s no telling what the killer’s motivation might be.

Grab your copy of this unique cozy mystery because you don’t just read a Steve Higgs book, you get to live it right alongside the characters!