Want the latest information and stories behind the stories? Subscribe to the email newsletter! Newsletter is sent every other month. You can unsubscribe at any time. Your information will never be sold.
January 15, 2021

After I read the manuscript for What Sam Knew, I contacted Steve and asked him how he wanted me to handle the introduction of the Godmother. She is introduced via a note left for Patricia. Did Steve want the note read in Patricia‘s voice? A neutral voice? Or what I thought the Godmother’s voice might be? Steve left it up to me. I read through the note again and got a picture in my head of a coral snake. If you didn’t already know, a coral snake is a venomous reptile indigenous to the American southwest. It’s fairly pretty to look at, covered in broad bands of red, yellow, and black (in that order. If the bands are in a different order, it’s a different kind of snake that isn’t venomous…just to be confusing). The coral snake is not a pit viper like the diamondback rattlesnake, which is the variety of snake I’m always looking out for when I take the garbage out to the dumpster. The coral snake doesn’t have a flat, triangular shaped head. It also doesn’t have a rattle, which is a rattlesnake’s rather polite way of signaling that it's about to do you a world of hurt. No, the only real warning you get from a coral snake is that it looks like a coral snake. You see those bright, beautiful colors and know you’re in trouble.

That’s what the Godmother’s first warning to Patricia Fisher made me think of, a coral snake. And I read that note in the voice of what I thought a coral snake would sound like if she were a female human crime boss. It was fun. I like a good nemesis story and getting to voice both the heroine and the villainess is really enjoyable.

As the story of the Godmother developed, Steve explained through his books how Patricia saw the rivalry. Interestingly, Patricia saw herself as a mongoose and the godmother as a venomous snake. Fantastic, I thought when I first read that. The coral snake vision stays!

There came a point later in the series, I won’t say when, no book spoilers, when I thought I knew who the Godmother was. I never asked Steve for that information, and he never volunteered it. It was better that way, I think. It meant that Patricia’s voice couldn’t understand things or figure things out any faster than Patricia could, and I think that’s the way it should be. Nonetheless, there came a point where I thought I knew where Steve was going with things. It turns out I was right. And, it was the same time that Patricia figured it out. Does that mean that in action onboard the Aurelia there are small, subtle vocal cues about the Godmother? Maybe! You’ll have to listen to the series and decide for yourself.

At last, I get to voice the moments I have been waiting for, the moments where the mongoose battles directly against the venomous snake! And it is so good. Steve has written this rivalry masterfully. It’s dangerous, intense, and at times surprisingly funny. It’s a lot of fun for me to narrate, and I hope when The Godmother comes out in early spring that it will be just as much fun for you to listen to!

In the meantime, I’m putting up the photo and the link for What Sam Knew, the audiobook where the rivalry with the Godmother was first revealed. 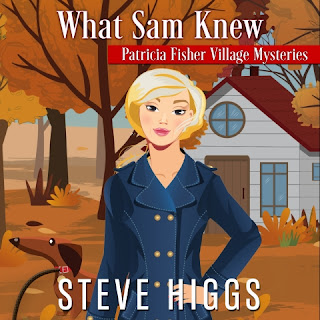