Want the latest information and stories behind the stories? Subscribe to the email newsletter! Newsletter is sent every other month. You can unsubscribe at any time. Your information will never be sold.
October 28, 2021

Why it’s on my 2021 Treat List: Checks all the boxes for the “What the Hell did I just watch” category 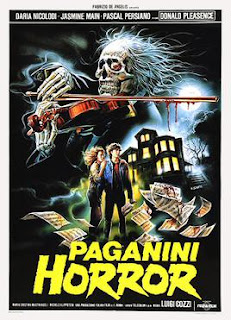 This is an Italian horror film dubbed with English. It’s blissfully weird. The music…well, music is part of the plot, you should know that going into this…the music keeps going back and forth between classical and pop. Love it. The costumes are amazing, very 80s, very over the top, especially when we get to filming the music video in the haunted house. Visually the whole film is weirdly beautiful…goth me now wants to see a horror movie/music video filmed in an all-white room because it can work! And that scene with the thinly-veiled mannequins…so weird, so beautiful. Also, I learned from the opening scene that I had the wrong Barbie dolls as a child. Little goth me should have had an Italian Barbie. Watch Paganini Horror and you’ll get it.

Plot – pretty good. Acting – good. Eye candy – yeah, I gotta say there’s something here for just about everybody. Special effects – cheap as hell but they work.

Okay to watch with the kiddos – I wouldn’t. It’s too scary for kids and too weird. You’ll spend half the time trying to explain what’s happening and that’s no fun. Oh, and you don’t want to explain that opening scene to your kids. You can just tell them to never throw hairdryers into bathtubs full of water.