Want the latest information and stories behind the stories? Subscribe to the email newsletter! Newsletter is sent every other month. You can unsubscribe at any time. Your information will never be sold.
October 21, 2021 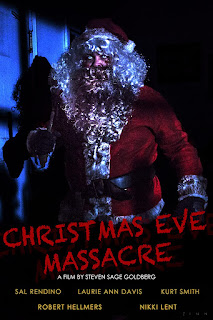 Why it’s on my 2021 Halloween Treat List: Because some of you like slasher films. I picked a good one for you.

In general, I don’t like low-budget, independent slasher films. The story line – assuming there’s anything faintly resembling a plot – is usually formulaic. The deaths are predictable. Innovations seem to be based on increasing the gore in the killings and I don’t care.

THE ACTING IN THE MOVIE IS REALLY GOOD! Sometimes you get a low-budget, independent horror with one, maybe two good actors. In this movie everyone is solid! Which really tells us that the movie has both good actors and a good director. I wish everyone involved in this movie success in the future, ya’ll got skills. Also, excellent use of Christmas lights in both sets and costumes/props. There are some visually strong moments.

I’m not going to go into a lot of detail for this one; you either like slasher films or you don’t. I will say there’s a nice little twist in the plot and a quick, classic, and effective post-credits scene.

Okay to watch with the kiddos – No! What? Hell, no!

There. I put a slasher film on the list. You’re welcome.