Want the latest information and stories behind the stories? Subscribe to the email newsletter! Newsletter is sent every other month. You can unsubscribe at any time. Your information will never be sold.
October 13, 2021 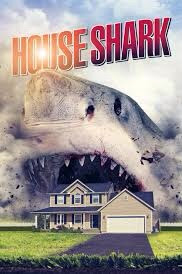 Why it’s on my 2021 Treat List: It’s the greatest of the independent, modern, deliberately bad horror movies.

What’s that? You thought the greatest independent, modern, deliberately bad horror movie was Velocipastor? WRONG. House Shark is much worse and much better at deliberately being bad. Funnier too.

Some of the things that make it so good at being bad: the concept (there’s a kind of shark that lives in houses, not in a “home” but in your HOUSE…like in the plumbing and walls), the jokes (they’re terrible. Hee hee.), that one character with a German accent…so the accent is explained, eventually, but the Lederhosen? That’s real commitment! And one of my favorite moments, the point when the house shark hunters decide to solve the problem a la Looney Tunes by having one of them put on a girl shark suit to bring the house shark out of hiding.

And there’s one scene that is weirdly beautiful, the “underwater” fight scene. They’re not underwater, it’s all lighting, surprisingly good cinematography and great acting…really, the scene is almost too good for this movie! James Cameron could take notes on how to film underwater scenes from House Shark.

Plot – bat shit ridiculous. Acting – Good. Comedy isn’t easy, and these actors were up for the challenge. Special effects – LOL what? Oh, wait. There is that fantastic underwater scene. Oh, and the babysitter dying on the toilet…good effects for that.

Enjoy! And to all you die-hard Velocipastor fans out there…YOU’RE WELCOME!