Want the latest information and stories behind the stories? Subscribe to the email newsletter! Newsletter is sent every other month. You can unsubscribe at any time. Your information will never be sold.
October 23, 2021

13 Treats for Halloween - RiffTrax Paper and I 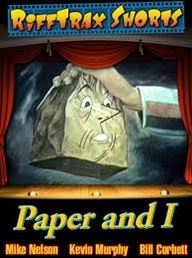 First, let me explain briefly about RiffTrax. Once upon a time there was a show called Mystery Science Theater 3000, also known as MST3K. Yes, I know there was a reboot recently, shut up. We’re not talking about THAT. Three of the writers/actors involved with MST3K have continued to work on projects together since the original show ended. They do what they did on MST3K – they riff on movies and TV shows. They poke fun at stuff. It’s good watching.

“Paper” is a short the RiffTrax guys found somewhere. Kids today aren’t familiar with this concept but “back in the day” when we had substitute teachers or our regular teachers gave up on us they would play films about various topics. For example, from one short shown in my school I learned about dental care from Jiminy Cricket of Walt Disney fame. “Paper” is about…paper. Sounds innocuous, right?

But it’s so creepy.

This kid keeps communicating with a brown paper bag about paper. But the paper bag is slowly dying. It also has magical powers at one point makes all paper products in the world disappear.

Because the guys are riffing on the film there’s a kind of light-hearted-air to the presentation. However, no amount of jokes can hide the truth…It’s creepy!

I think it takes a special kind of Halloween magic to make something as boring as paper into pure creepy, and that’s why this short makes in onto my 2021 Halloween Treats list. It is short. Watch it on your lunch hour on Halloween or before you show the main feature film in your home Halloween night.

Okay to watch with the kiddos: Yeah. They will pick up on sone of the RiffTrax jokes and the underlying creepy will go right over their heads.

You can find the short Paper and I on the official RiffTraxYouTube Channel!